This group tour is an exciting journey, during which you will touch the history, visit ancient cities, get acquainted with different cultures, and savor beautiful landscapes.

Tour route includes the famous Triangle of Tigris and Euphrates rivers, which without exaggeration can be called the Dawn of Civilization.

The narrow streets of medieval cities, old-time churches, mosques and madrasas, thrilling experience of shopping markets, stories of caravan trails are waiting for you there.

Arrival to Gaziantep airport. Transfer to hotel (check in at 12:00). Welcome lunch. Meeting at the hotel lobby at 14:00 for Gaziantep sightseeing tour.

First stop at Zeugma Mosaic Museum, the biggest and most famous mosaic museum in the world. It contains about 1700 m2 of antique mosaics from the Hellenistic period and Roman Empire.

Next is the historical center of Gaziantep, where you’ll roam at narrow streets surrounded by aged Antep houses made of stone and wood, and have a thrilling time at Eastern Bazaar, shopping for local souvenirs, antique and modern copper, leather and silk artworks.

Follows a coffee-break at Tahmis Kahvesi, the symbol of Gaziantep. It’s one of the oldest coffee shops in the world, with authentic interiors, founded around 1635. Here you will enjoy a coffee that indulges the most critical testes, prepared according to ancient oriental recipes.

Then comes dinner time, you will have an opportunity to get acquainted with the famous local cuisine.

Return to the hotel by 20:00. Free time. Overnight at the hotel. 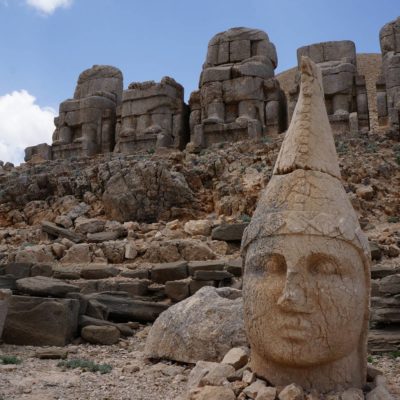 Breakfast. Check-out of hotel at 08:00. Your guide and driver will meet you in the hotel lobby. On 235 km bus trip to Mount Nemrut you will see the ancient city Adıyaman, Cendere bridge constructed by Romans, Euphrates river, and beautiful mount landscapes.

Nemrut Mount – the 8th Wonder of the World, God-Kings Place of ancient Anatolia, is widely known for numerous gigantic statues on the top of the mountain, that are erected around the royal tomb built 1st century BC. It is UNESCO World Heritage Site.

After Nemrut there is a lunch-break in local restaurant.

The next destination will be Göbekli Tepe (175km from Nemrut). Built in Pre-Neolithic era between 9,600 and 8,200 BCE, its monumental round-oval and rectangular megalithic structures considered to be the oldest temple in the world. Even famous Egyptian Pyramids and Stonehenge were constructed about 6000 years later. Göbekli Tepe was finally opened for visitors in 2018. It’s also in UNESCO World Heritage List.

Next destination 16 km away is Şanlıurfa, or Urfa. Estimated arrival time 18:00. Hotel check-in.

Evening walk in the center of Şanlıurfa to Balıklıgöl – a holy lake with biblical history and thousands of sacred carps. Dinner at local restaurant. Return to the hotel about 20:30. 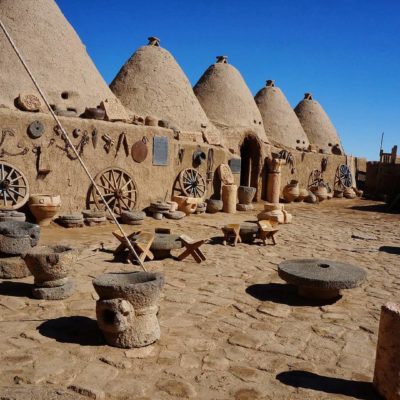 Breakfast. At 09:00 meet your guide in the hotel lobby to go for a sightseeing tour of the historical part of Şanlıurfa. or simply Urfa. It is considered one of the oldest cities in the world. The ancient Greeks and Romans called it Edessa. The city is known as one of the oldest centers of Christianity.

You will visit old Urfa castle with its famous dual columns, to enjoy a breathtaking panoramic view of the city. During the city tour, explore the archaeological site of caves that were used as homes by early Christians. Also, you will visit the Urfa archaeological museum, which is among the top three in Turkey.

After lunch we drive 50km to Harran, the key ancient city in Upper Mesopotamia, repeatedly mentioned in the Bible. Harran is famous not only for its historical sights but also for traditional mud-brick “beehive” houses, that keeping cool even in hot summer month.

From there we go 210km to Mardin. Check In. Dinner. Free time

Breakfast. At 09:00 city walk to the old Mardin. Mardin is one of the few cities in the world that still retain their historical appearance. The local architectural style was founded in the reign of the Artuqid dynasty in XI-XV centuries.

Mardin developed and grew rich due to its unique location at the crossroads of ancient trade routes. It was an important trading center on the Great Silk Road. The huge diversity of religions, cultures and languages persists to the present day.

During sightseeing tour, you will see old Palace of Governors, historical post office, traditional bazaar, and many old mansions built in the unique local architectural style. Then comes old mosques Ulu and Latifiye, Kirklar Syriac Orthodox church, and the city museum - that in the past used to be the Patriarch’s residence.

An incredible view of the old city and the Mesopotamian plains opens from Zincirye Madrasa, located at the pedestal of the Mardin castle.

Lunchbreak after city walk. You will also have the opportunity to try traditional Arabic coffee called Myrra.

The next destination is 6km southeast of Mardin. We come to visit the Kasımiye Madrasa and Deyrulzafaran Monastery. The monastery was built in 493AD for Syriac Orthodox (Assyrian) Christians, and is active now. as Worship is held there in Aramaic language, which is believed to be preached by Christ himself.

Returning to Mardin at 17:30. Free time to relax or visit local handicrafts workshops. 19:00 dinner at restaurant with local music show. Overnight at the hotel. 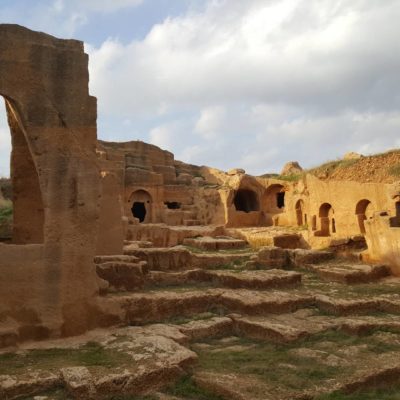 Breakfast. Check-out of hotel. Departing to Dara (35km). Dara, or Anastasiopolis, was East Roman key outpost fort in northern Mesopotamia, on the border with the Sassanid Empire. Its uniqueness belongs to the fact that it existed only 200 years and retains the specific features that characteristic precisely for early Byzantine Empire.

Next stop is at Nusaybin (32km), where we will see the church of Saint Jacob of Nisibis. It was built between 313–320AD and features the characteristics of the Late Roman architecture. The church is listed in UNESCO World Heritage site.

After lunch we go to Mor Evgin (30km) Monastery. It was founded in 340 or 363AD and considered to be one of the oldest Christian monasteries in the world. Mor Evgin monastery consists of both caves and buildings. The ruins of the ancient city of Marin (Merdis) in 3 km from the monastery has been known since the times of Neo-Assyrian Empire.

After Marin we will drive to Midyat (77km). Dinner. Transfer to the hotel for overnight. 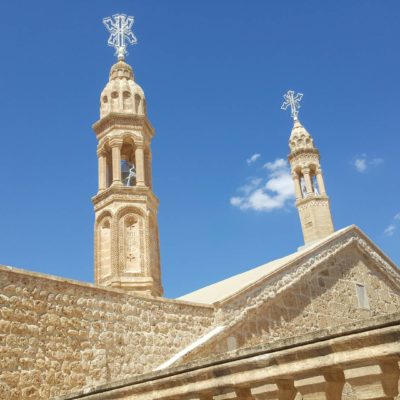 Breakfast. Start the Midyat city tour at 09:30 by visiting the Old City of Midyat. Its population was predominantly Christian until recent time. There are five churches and one monastery. Midyat Konuk Evi is a gorgeous architectural mansion built in local stone masonry. Nowadays it’s often used to shoot Turkish TV shows.

Midyat is famous for its viticulture and winemaking traditions. You will have an opportunity to visit local wine shops and enjoy a tasting session.

Check-out of hotel. 23km route to the Mor Gabriel Monastery founded in 397AD. The monastery is an important center for the Syrian Christians of Tur Abdin and the biggest in that area. Lunch.

Next destination is Hasankeyf (65km). It is an ancient cave town located along the Tigris River. People lived in Hasankeyf as far as 12,000 years back, according to scientists. Most of the city and its archeological sites are at risk of being flooded after completion of the Ilisu Dam.

Breakfast. Check-out of hotel. You will be taken to the historical center of Diyarbakır surrounded by black-stone high walls. For this reason, it received its second name “Black Fortress”. These walls were built at the time of late Roman Empire by Emperor Theodosius II.

You will visit the historical Grand Mosque which was built in the 11th century on the base of the church using fragments of ancient temples, the Caravanserai, the Museum of Diyarbakır, the Citadel.

One of the most interesting sights of Diyarbakır is the St. Mary Church which belongs to the local Syriac Orthodox community. The oldest parts of the building date back to the 3rd century. It considered to be one of the oldest Christian churches in the world. Lunch. Free time.

At 17:00 you will be taken back to the hotel to pick up your luggage, then transfer to the Diyarbakir Airport.

End of the tour. 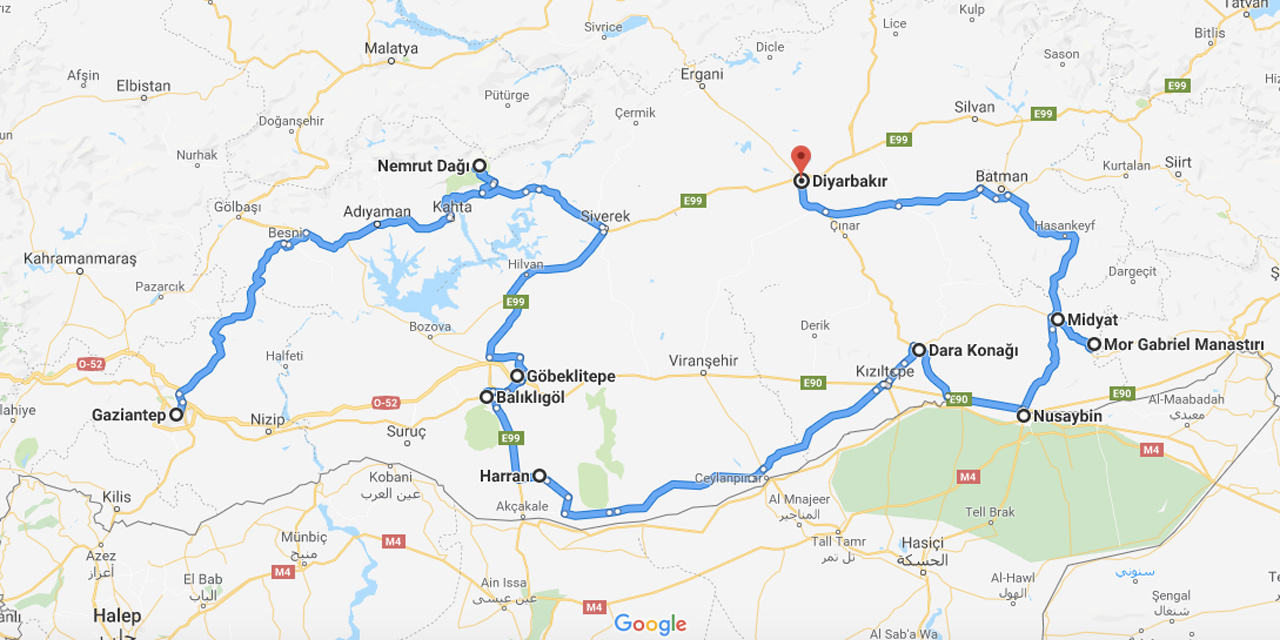