Lets explore UNESCO historic sites in Turkmenistan, have experience the warm hospitality, see modern architecture of Ashgabat and the flaming crater at Darvaza.

During the trip, you will visit:

Arrival in Ashgabat airport. Meet our guide and driver, transfer to hotel 4* for overnight. 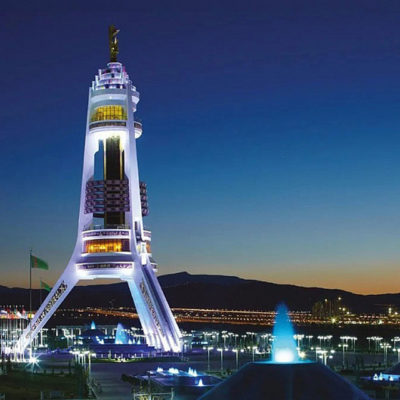 We begin the day heading for the fabled Bazaar of Tolkuchka, attracting colourfully dressed people from all over the country to buy or sell camels, cattle and poultry, amulets, carpets, jewellery, and myriads other things. From the market we continue for sightseeing Ashgabat.

We will visit the Park of independence with its independence monument, and Neutrality Square, famous for its Arch of Neutrality topped by a rotating gold-plated statue of the first President of Turkmenistan, and Earthquake Memorial dedicated to the victims of the 1948 earthquake.

In the afternoon we visit the National Museum of History and Ethnography (more than 327.000 objects on a display) and see the exclusive ancient artifacts from different historical &amp; archeological sites of Turkmenistan, like Old Nisa, Ancient Merv and etc. Overnight at hotel 4*. 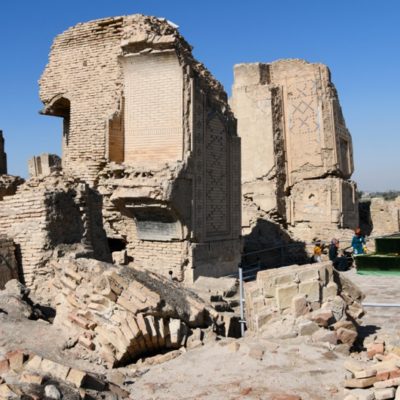 In the morning, we head east along one of the major directions of the former Silk Road in Turkmenistan. 12 kilometres from Ashgabat we will make a stop near modern Anau, at a former medieval city of Bagabad, featuring the citadel of an important Timurid-period centre and the ruins of the Seyit Jemaleddin mosque, which is referred to in many historical sources as “house of beauty”.

Many centuries ago (around the 5 th mill. BC) this area accommodated the population of early Central Asian farmers who developed the world-famous Anau culture, evidences of which were discovered and extracted during archaeological researches throughout the XX century. 120 km from Ashgabat, we make a short stop to stretch our legs roaming through the ruins of Abiverd, once an important trading town of northern Khorasan and a key link on the Silk Route among Nisa, Merv and Nishapur.

Then we continue to Mary, observing succession of desert, settlements and fields and encountering numerous “depe”, mounds marking and hiding remnants of former fortified strongholds, caravanserais, watch-towers or country-side estates of wealthy landlords. In the afternoon, we arrive in Mary, the capital of the present-day Mary region and the centre of the Murghab oasis. Overnight at hotel 3*. 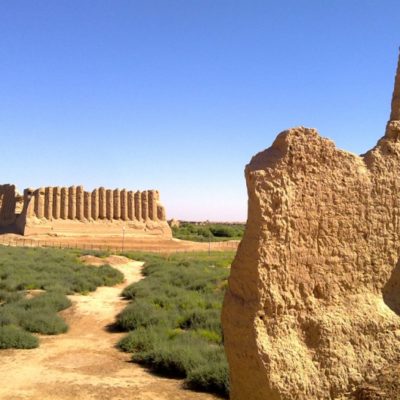 After breakfast, we head 25 km to the east of Mary, towards Bayram-Ali, the contemporary re-incarnation of and humble suburb of the glorious Ancient Merv (UNESCO World Heritage Site). One of the major archaeological sites of Central Asia, Merv played an important part in the development of the Silk Road for more than 2 000 years. Within the limits of the archaeological park, which is 1200 ha, we will have a chance to observe all constituent parts of the “wandering city”.

A series of adjacent cities, which can be roughly divided into the ancient (Erk Kala and Gyaur Kala), the medieval (Sultan Kala with its suburbs), and post-medieval (Abdulla-Khan Kala and Bayram-Ali-Khan Kala), appeared in the course of time as a token of the natural progress of the city from initial stages of its existence to a more advanced level. Besides remnants of the cities of Merv, we will visit the VI-IX cc. AD forts of Big and Little Kyz-Kalas, excellent examples of the so-called corrugated Koshks; the splendid XII c. mausoleums of Sultan Sanjar and Muhammed ibn-Zeyd, demonstrating exquisite Seljuk period brickwork and architectural décor.

If time and enthusiasm permits, it is possible to visit several more interesting spots within the site. After sightseeing, we head back to Mary. On arrival in Mary, we visit local History Museum, presenting a wide array of archaeological finds (dating back to the III mill. BC through the late XIX century) from both Ancient Merv and Bronze Age sites of the Margush country. In the afternoon we fly back to Ashgabat., from a newly built airport of Mary. On arrival in Ashgabat, transfer to hotel for overnight.

In the morning we catch our 4x4 AC vehicles and head north towards the central Karakum, to see the Darvaza flaming crater (260 km).

En-route make short sightseeing stops at large desert villages of Bokurdak to see the life of the semi-nomadic population in the desert.

When we reach the crater, short exploration of the area. Return to Ashgabat (260 km), for overnight at hotel.

Early morning transfer to airport for departure home. End of the tour.